How Does the World Cup Affect Japanese Power Consumption?

All eyes were on Japan this year as they beat Spain and made it to the round of 16 against Croatia.  Both the matches against Spain and Croatia occurred in the early hours of Japan’s morning. The early matches resulted in some interesting power consumption patterns for the Japanese Power Market.  This phenomenon is far from unusual with fans staying up late or getting up early – making coffee/tea or pouring warm sake.

On Friday, 2nd December 2022, Japan vs Spain started around 4am JST, and added roughly 3.9 GWh to Tokyo’s (TEPCO’s Service Area) power consumption from 2am – 9am.  This can be seen by the much steeper morning ramp-up as fans in Tokyo began their day far earlier than usual – starting the tea kettles and heaters hours earlier.

The graph below shows Tokyo’s actual power demand (blue curve) alongside what the TESLA model estimates power consumption would have been if there had not been the football match.  The red shaded area depicts the additional MWh from Japanese fans waking up early for the match. 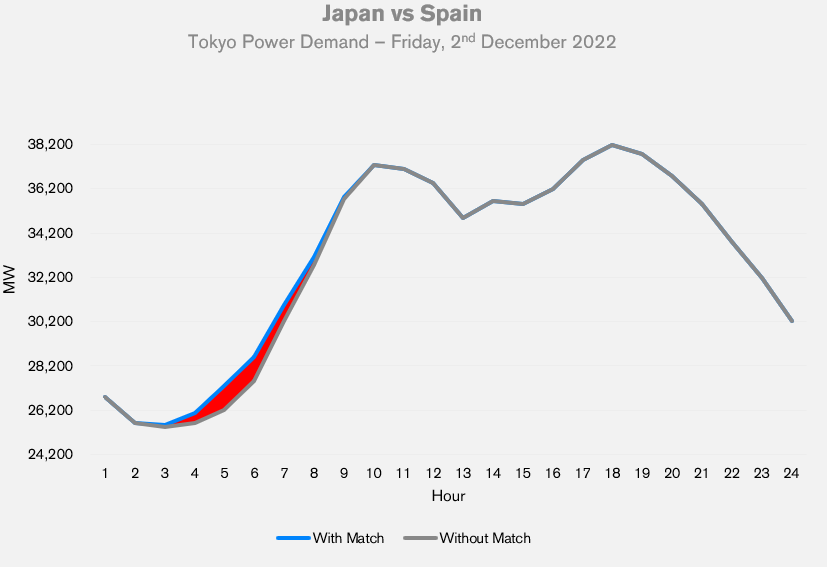 Shortly after midnight on Tuesday, 6th December 2022, the round of 16 against Croatia kicked off.  The graph below shows that the dedicated fans stayed up throughout the night, adding nearly 5 GWh of additional power consumption from midnight through 5am. Note that additional power was also consumed on the evening of 5th December leading up to the match.  This was a particularly cold day, so the heaters were cranking extra hard throughout the night.

So, What Does This Mean for Demand Forecasting?

TESLA preserves these effects within the load forecasting model for two reasons:

TESLA actively forecasts power demand for all 9 regions in Japan.

Check out our latest news and case studies