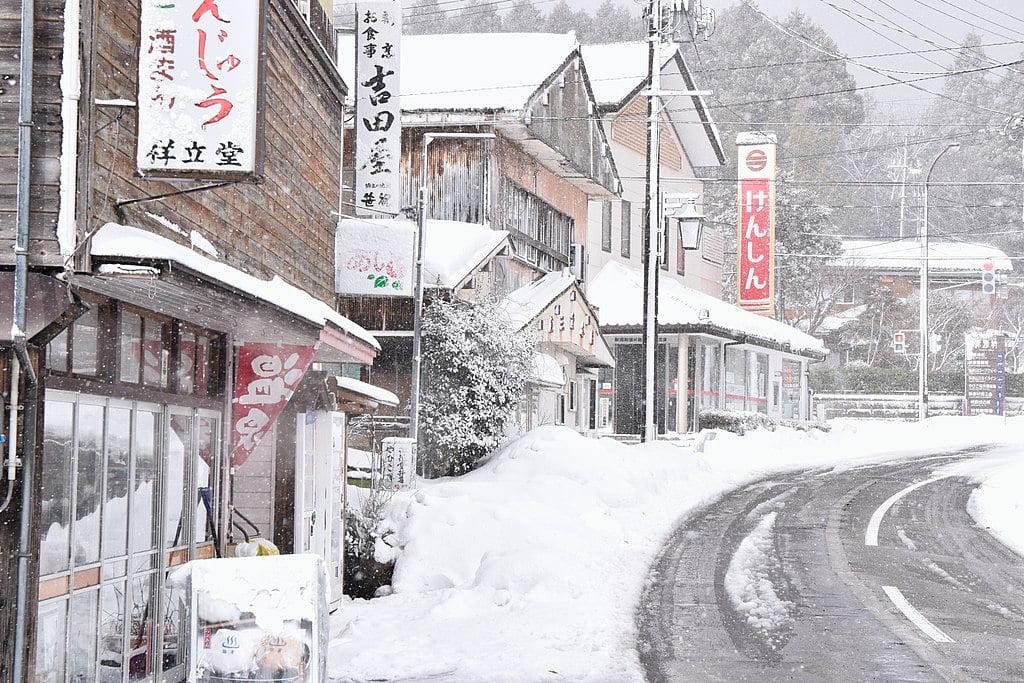 Given Japan’s dependency on energy imports such as LNG and coal, the government has asked households and companies to conserve electricity during the peak winter months of December through March. Now that the first month of the policy has passed, we can analyze year-on-year weather-adjusted load to see if this policy had a material effect.  Weather-adjusted load, or weather-corrected demand, normalizes the load series for the annual fluctuations in weather, so we can focus on the non-weather-related load growth or contraction.  In other words, the underlying load growth.

Of course, many factors will influence the year-on-year load growth, such as population, state of the economy, behind-the-meter renewable generation trends, etc. But as annualized Japanese power consumption is relatively stable (except for the COVID pandemic), a material change serves as a good indicator of material demand destruction likely caused by this power-saving initiative. It turns out, there was a material decrease in underlying power consumption from 1st December 2022 to date. Keep reading to see the effect of each of the 9 regions.

For the month of December, we can see that average weather-corrected demand is 2.4% lower than the previous year. This is a very significant decrease as it shows the power saving initiative essentially wiped out the 2.8% underlying December electricity demand growth observed since 2016 as we presented at Vanir’s Japan Power Week in Tokyo in October 2022. Missed that presentation? Download the slide deck here.

The 2.4% average demand decrease is easily seen in the difference between the orange line and the blue line below. 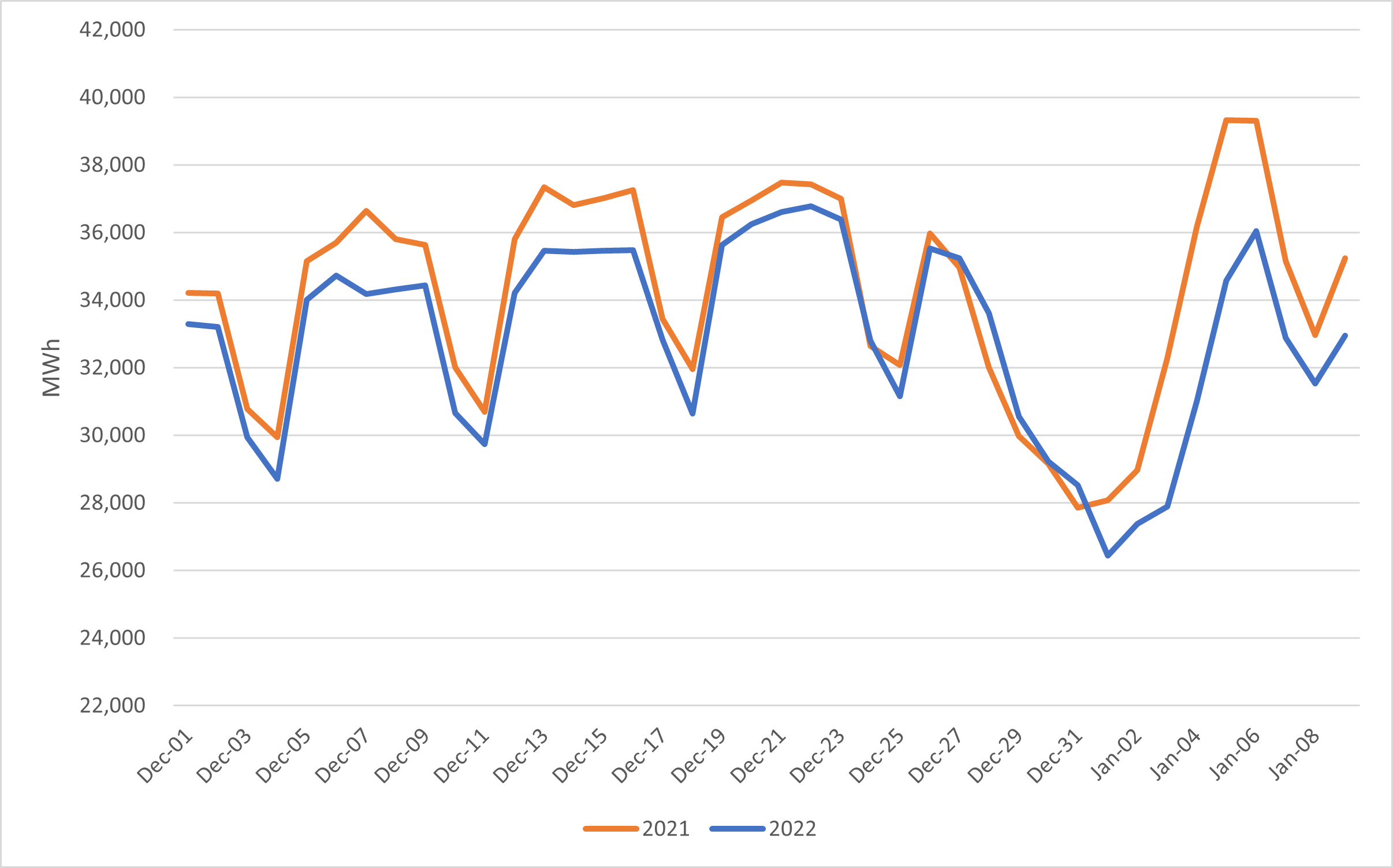 The graph plots the weather corrected demand For December 2022 to date compared to the same date range from 2021. Note that 2nd December 2021 – 1st January 2022 data is used to represent December 2021 to align the days of week.

Unlike Tokyo, we did not see much of a decrease in Hokkaido’s underlying demand this December compared to last year.  We only see a 0.2% decrease in December’s weather corrected demand.  This is easily explained since the primary heating source in Hokkaido is from Kerosene followed by district heating. If the primary heating source was electricity, we would expect the lower underlying demand due to the government’s power saving initiatives. 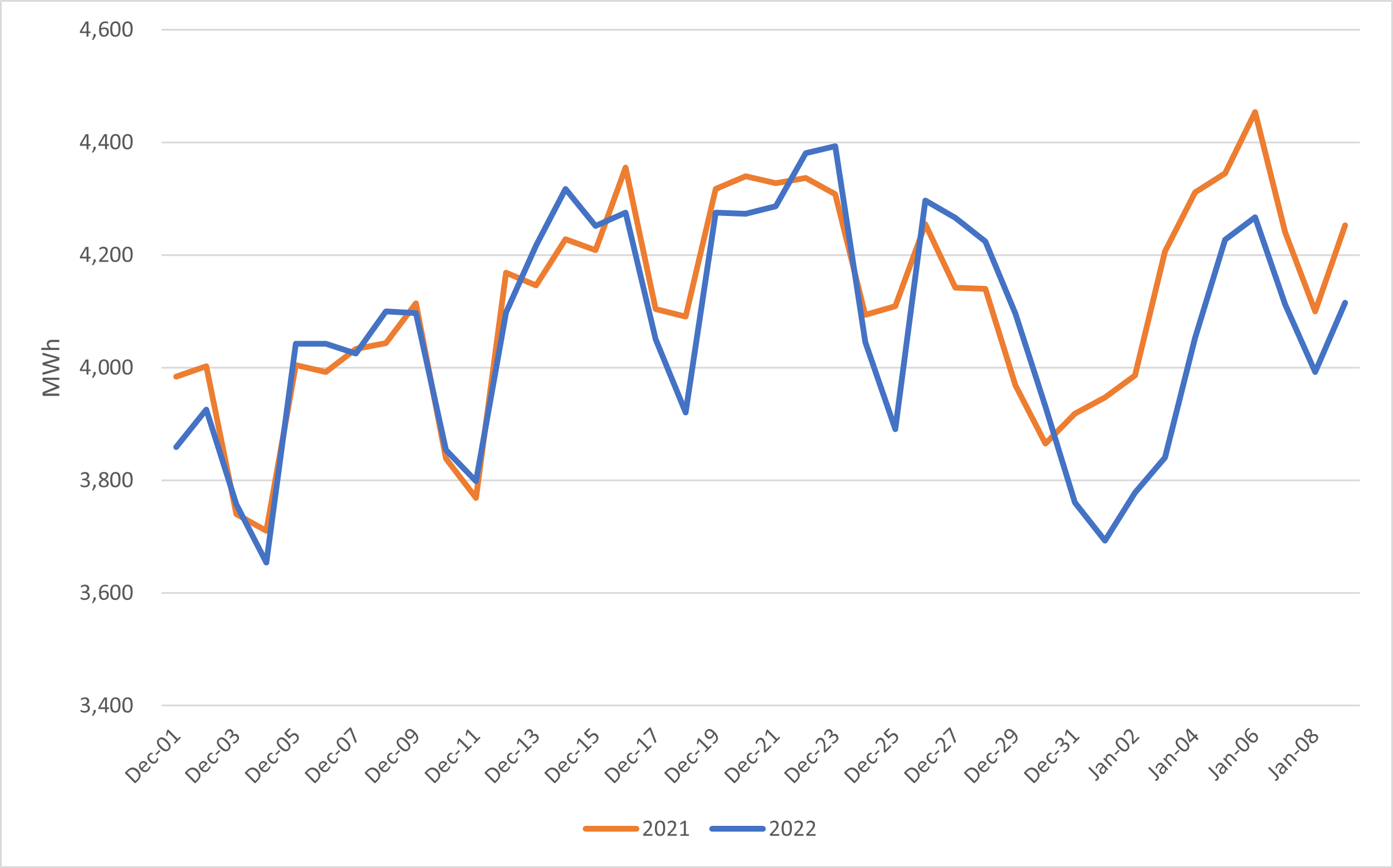 Like Tokyo, Tohoku’s winter electricity consumption has been on the rise with December’s underlying demand increasing by 3.1% from 2016 to 2021.  However, our analysis shows that the power-saving initiative has been very effective in Tohoku, with December’s underlying demand coming in 1.9% lower this year compared to last.  Like Hokkaido, kerosene is a significant component of Tohoku’s heating mix.  If that were not the case, we would expect an even larger decrease. 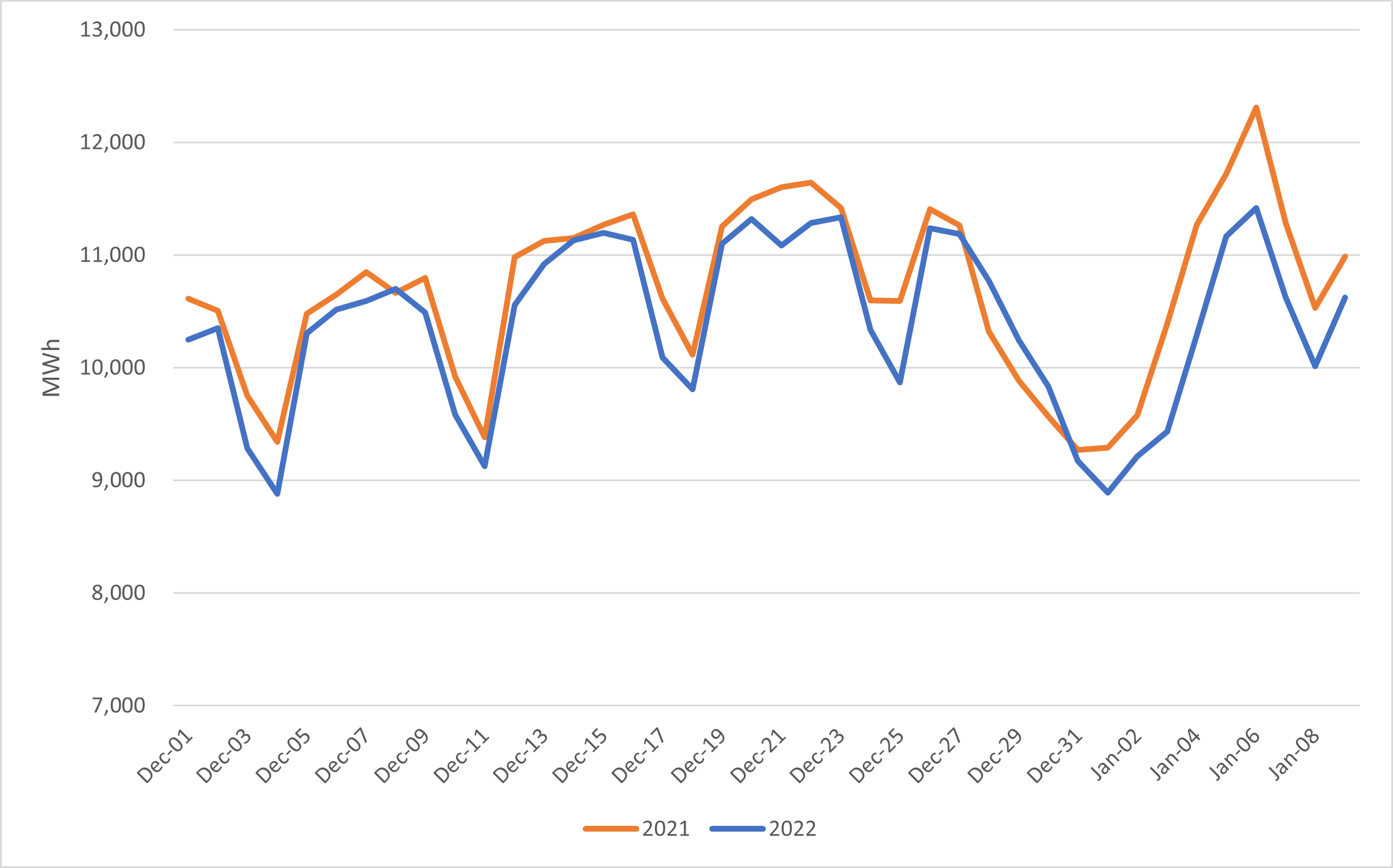 In Hokuriku we can observe a clear 3% contraction of underlying electricity demand this December relative to last year’s.  This is very significant as although Hokuriku’s winter electricity consumption had been growing over the years, it has been at a rate about half that of Tokyo’s. 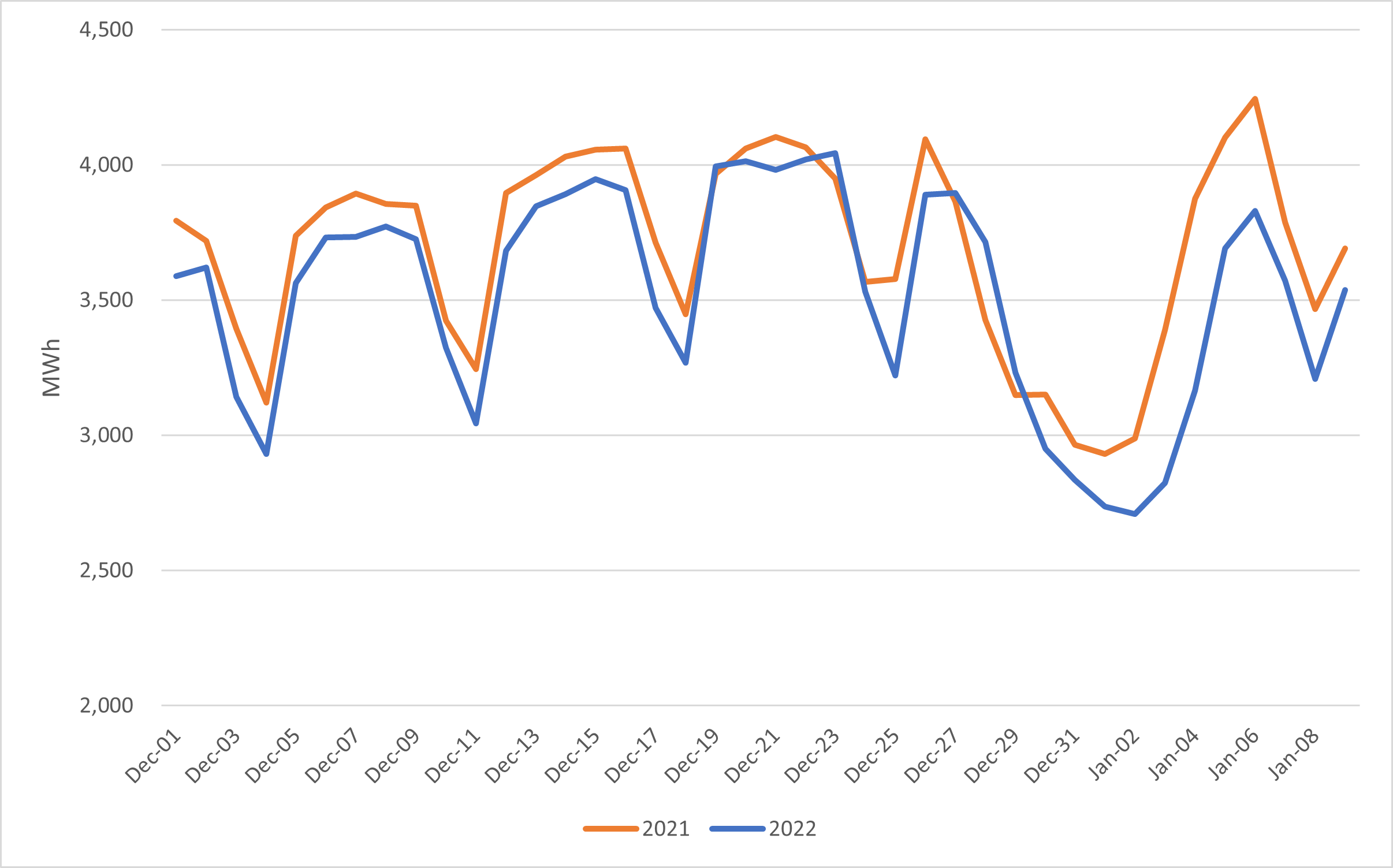 We can see that the power-saving initiative in Chubu has worked well with December’s average underlying power consumption down 2.4% this December from last year.  This region is unique in that it is very industrial, indicating that industrials may also be playing a big role in this power-saving initiative.  For perspective, Chubu’s underlying power demand has been growing steadily over the years, with December increasing by 2.6% from 2016 to 2021. 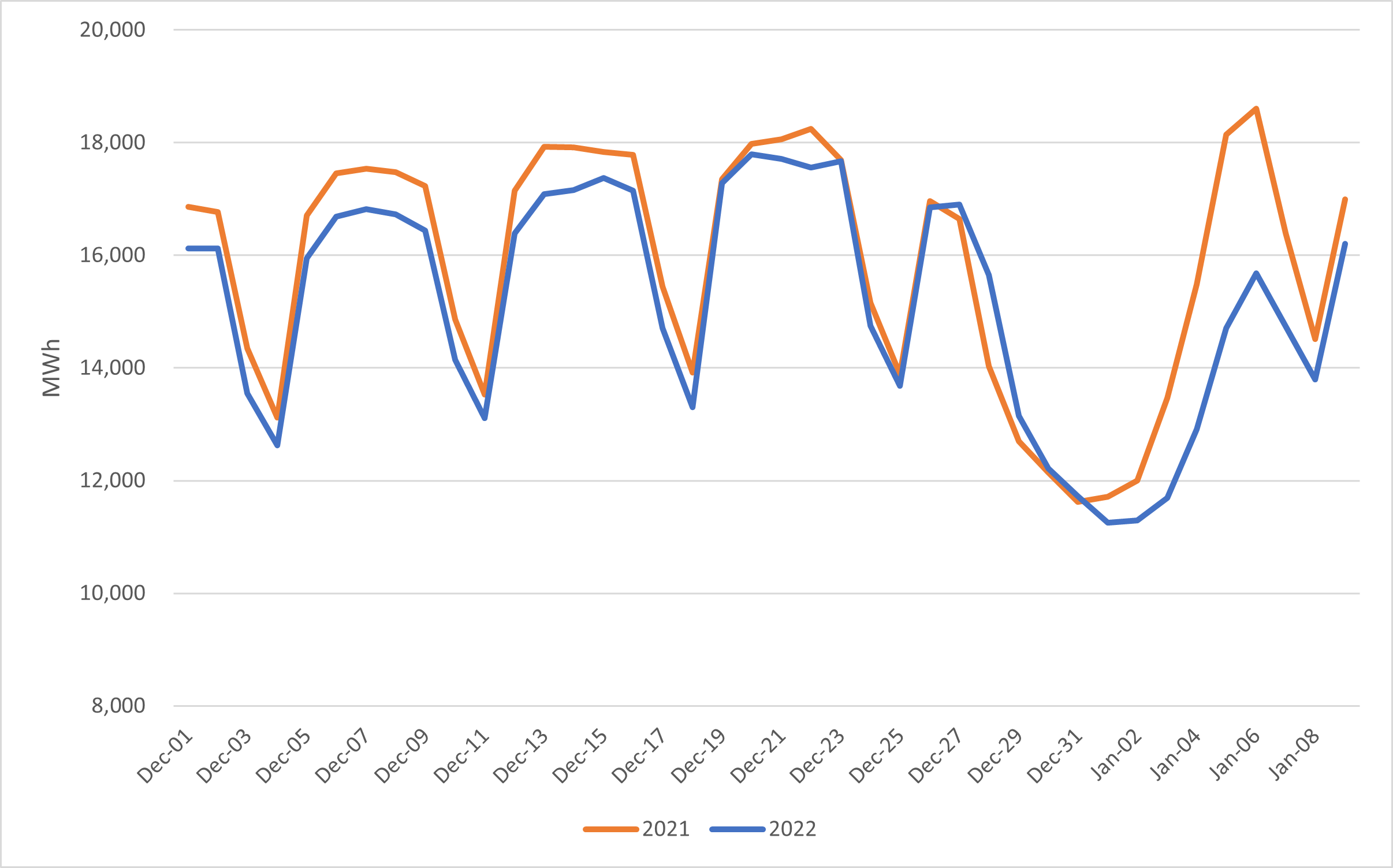 Kansai’s underlying electricity demand has come in 1.2% lower this December compared to last. Less than Tokyo’s 2.4% decrease, but still a significant signal that the energy-saving policy is working. 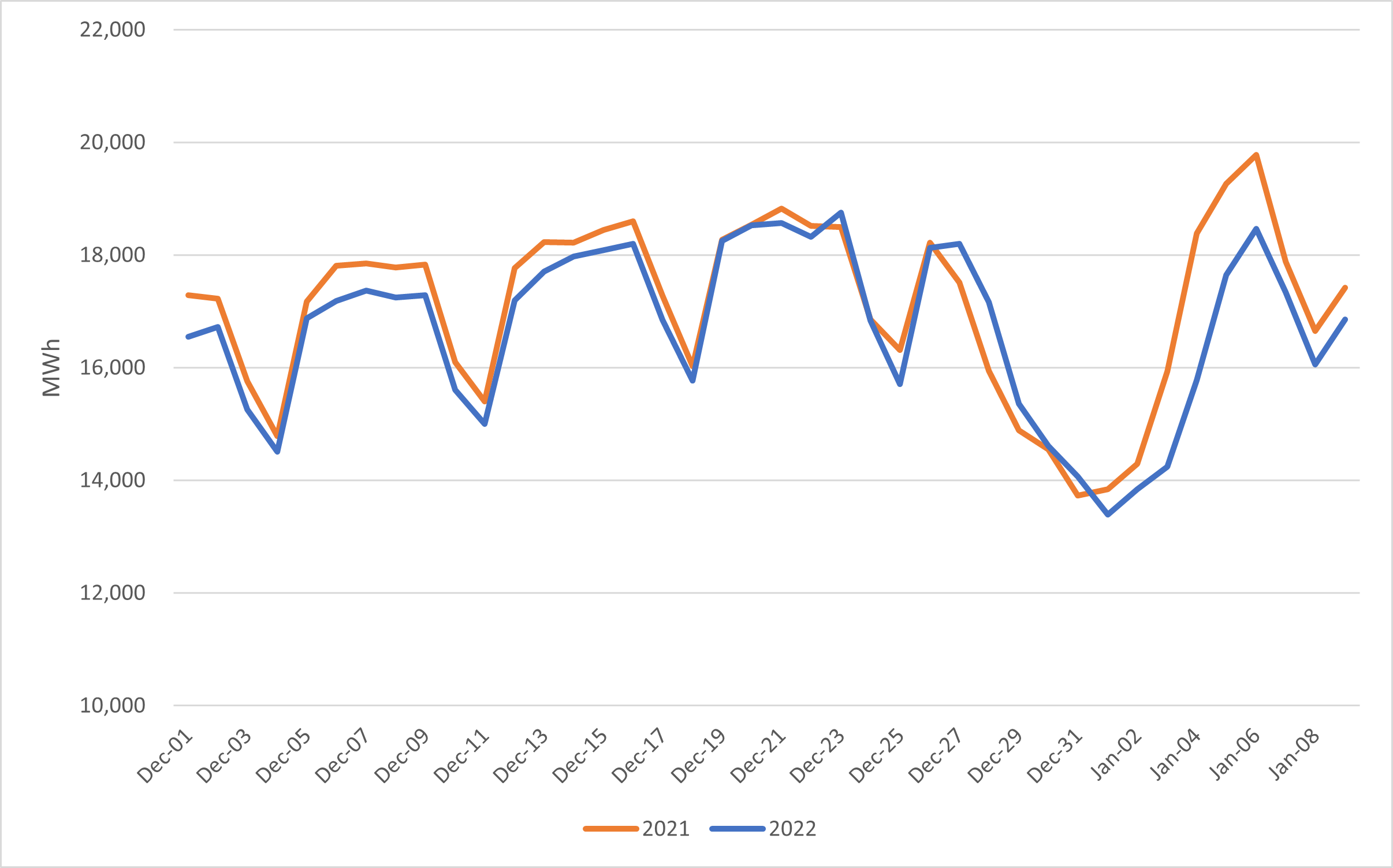 Policy-induced demand destruction can be seen in Chugoku as well as December’s underlying demand coming in 2.3% lower in 2022 compared to 2021. While most of Japan has seen a steady increase in underlying winter power consumption, Chugoku’s had been trending downward from 2016 to 2021. 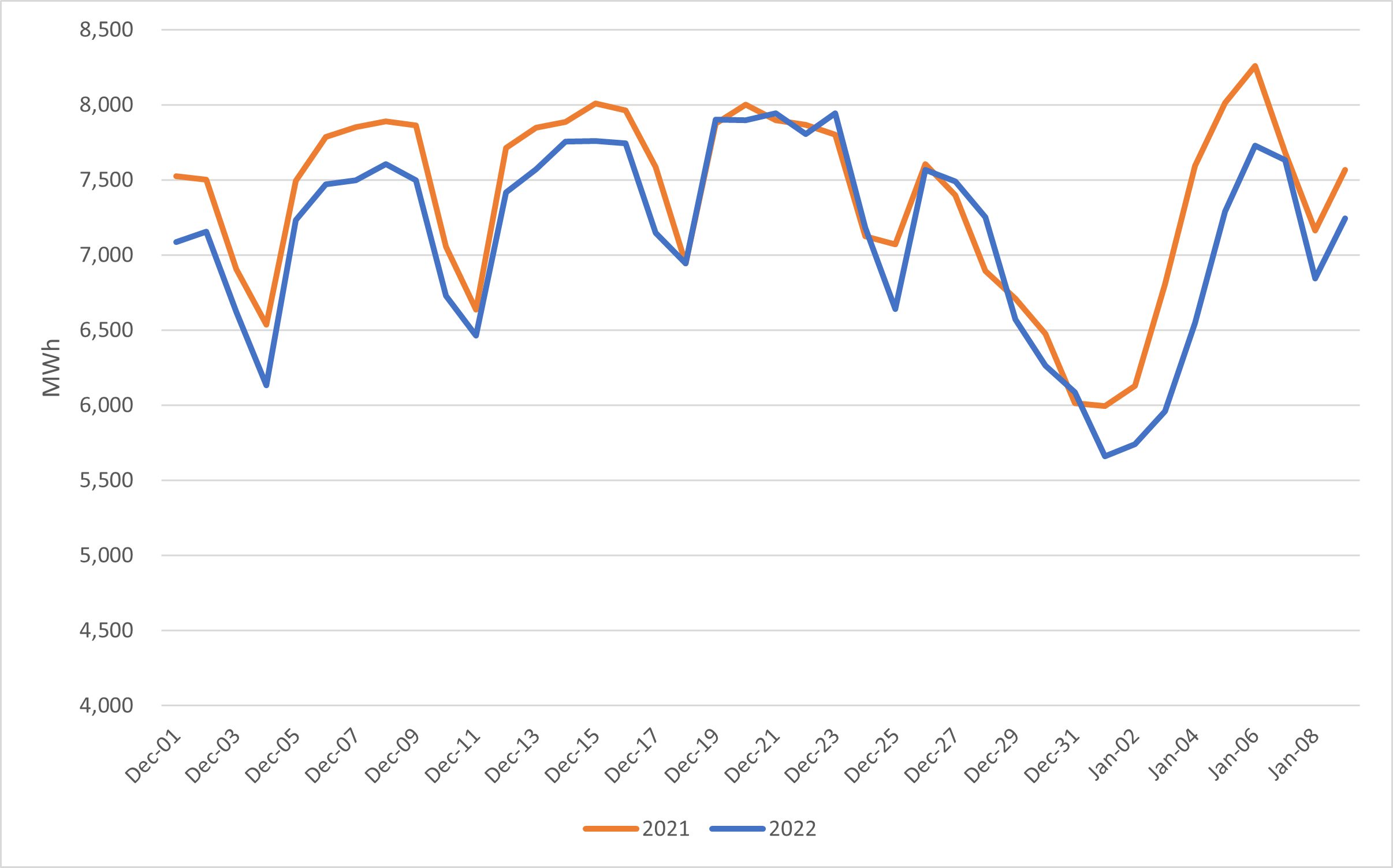 Results of Shikoku are inconclusive with periods of contraction and growth.  Since Shikoku is one of the warmest regions in Japan, it could be that there is less room for power saving in Shikoku than in other regions in Japan. 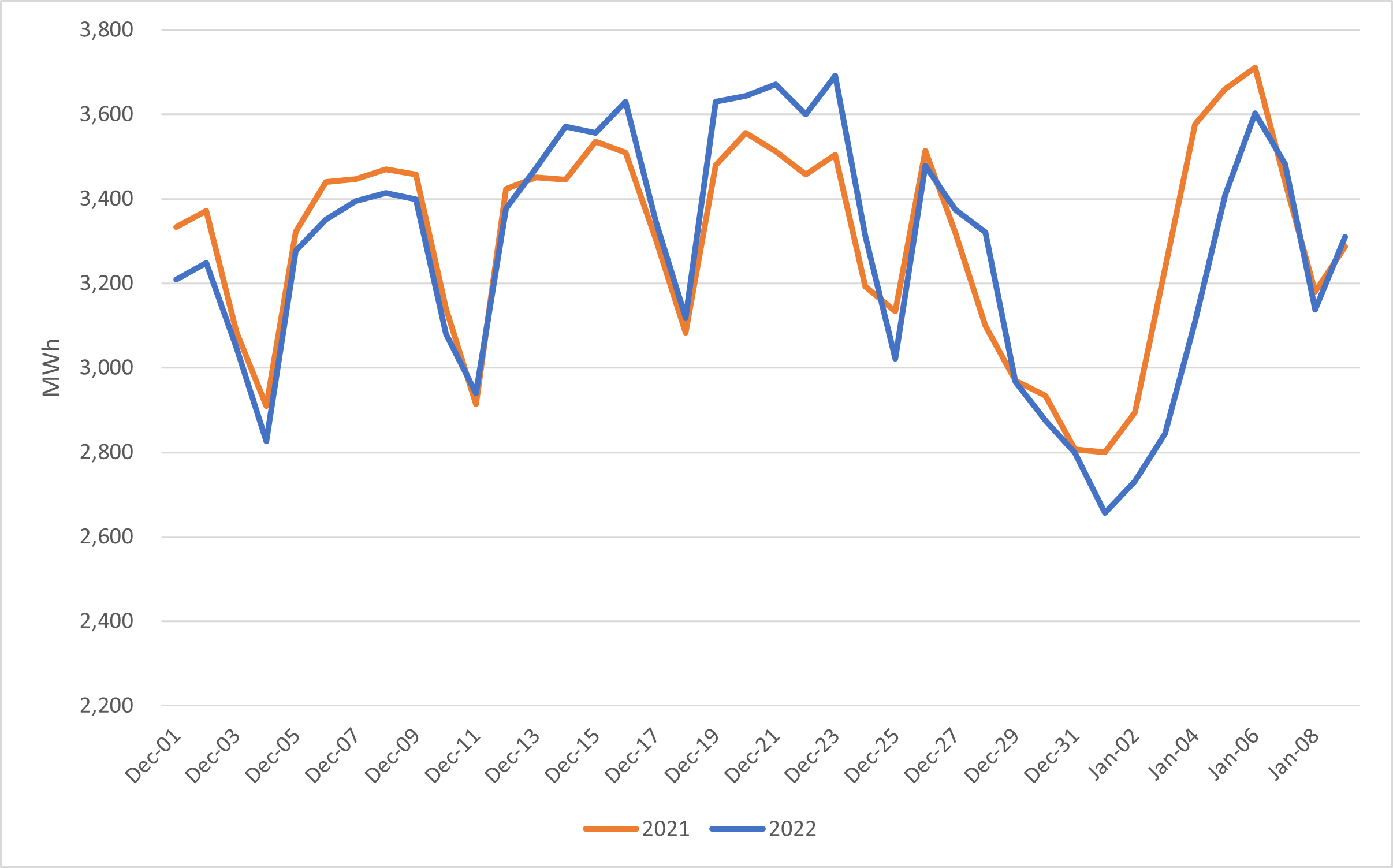 Like Shikoku, Kyushu is a warmer, sunny region in Japan.  December’s average underlying demand this December was 1.3% lower than the previous year.  Although much of this is most likely due to the power-saving policy, we must not ignore that there is a large amount of rooftop PV in Kyushu.  We should expect a portion of underlying power demand to decline each year as more rooftop PV systems are installed. 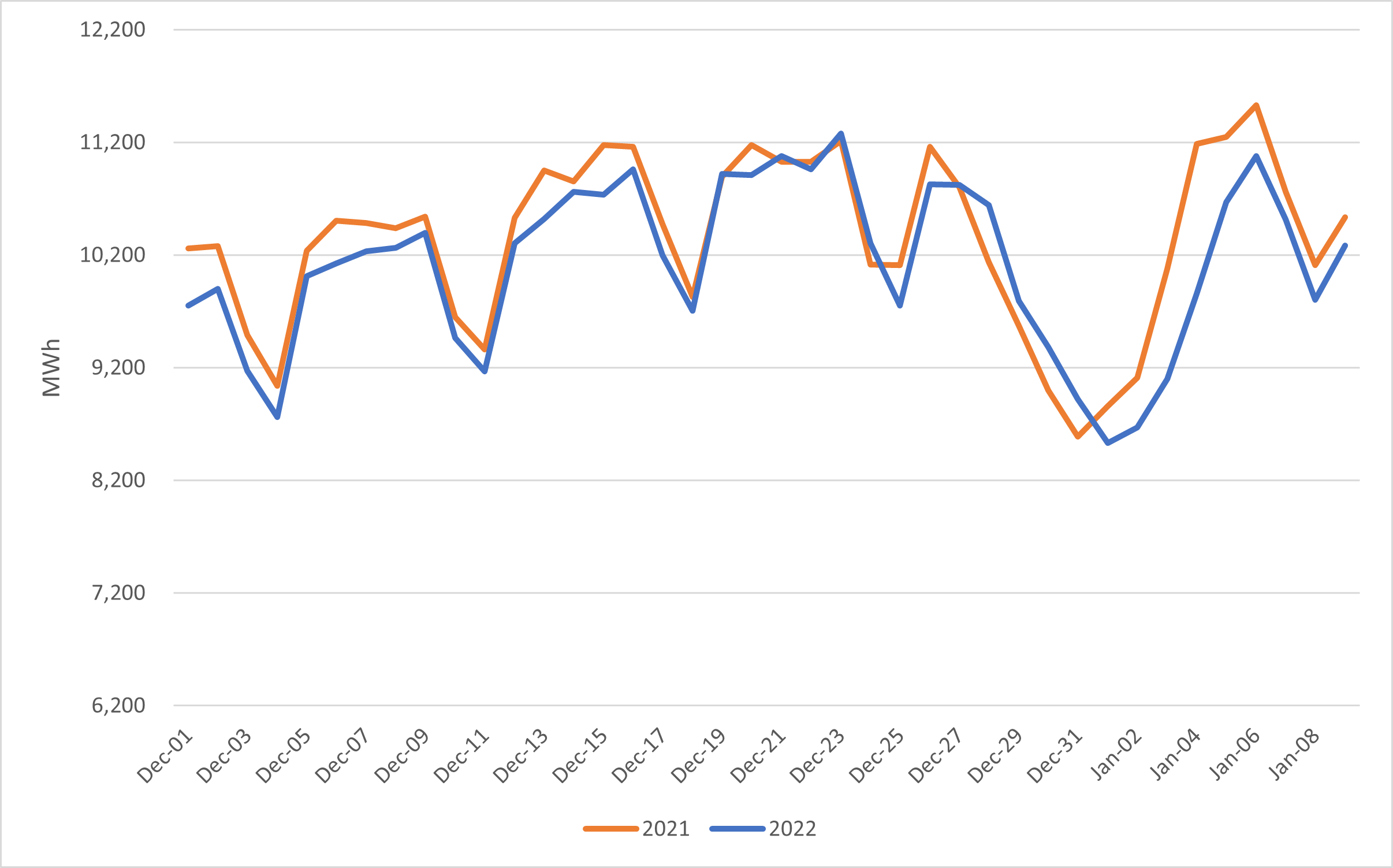 All TESLA Japan subscribers have access to this data via the Weather Decomposition feature within TESLAWeb and API.  Subscribe to TESLA but are not sure how to replicate the above graphs?  Get in touch to arrange a web demonstration.