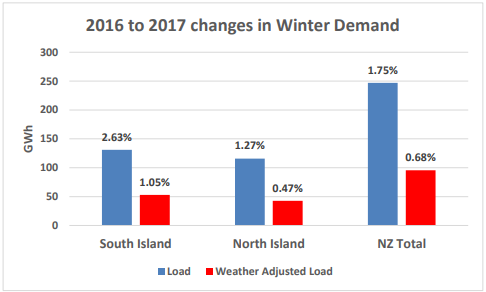 Controlling for weather effects, TESLA Asia Pacific Ltd observed 0.68% growth in New Zealand power demand this winter. This is an uptick from the slight 0.07% increase we saw last year. Observed total winter power demand increased by 1.75% from 2016 to 2017, this growth is mainly due to 2017’s winter being cooler than 2016’s. We observed weather adjusted load growth in both the North and South islands with the North growing by 0.47% and the South growing by 1.05%. The graphs below show the changes in total GWh from 2016 to 2017, along with their percentages.